Bonn, 14/11/2017 – Today, the InsuResilience initiative moved into a higher gear with the announcement of additional funding and many more partners. The InsuResilience Global Partnership for Climate and Disaster Risk Finance and Insurance Solutions, launched today at the 2017 UN Climate Conference in Bonn, now brings together G20 countries in partnership with the V20 nations.

The V20 is a group of 49 of the most vulnerable countries including small islands like Fiji which holds the Presidency of this year’s conference: COP23. Germany has joined forces with its partners, the Ethiopian Chair of the V20, the United Kingdom and the World Bank, in order to launch this Global Partnership. More than 30 partners from governments, civil society, international organizations, academia and the industry have already expressed their support and commitment to engage and contribute to the Global Partnership.

“The Global Partnership is a practical response to the needs of those who suffer loss because of climate change. And I am very proud that it has happened under Fiji’s Presidency of COP. At the same time, it is a means of preparing for a more resilient form of development for those who will have to adapt to the great challenge of climate change,” said the COP23 President and Fijian Prime Minister Frank Bainimarama.

Thomas Silberhorn, Parliamentary State Secretary to the Federal Minister for Economic Cooperation and Development, announced support for the new global partnership of 125 million US dollars as part of today’s launch. This follows the 30 million pounds Sterling commitment made by UK Government in July 2017 to the Partnership via its Centre for Global Disaster Protection.

The announcement comes in the wake of a year of damaging and devastating extreme weather events that have hit countries and communities in Asia, the Eastern Caribbean and the Americas with some of the events described by scientists as unprecedented.

The Global Partnership supports data and risk analysis, technical assistance and capacity building according to countries’ needs and priorities, solutions’ design of concrete risk finance and insurance solutions, smart support for the implementation for such schemes and monitoring and evaluation efforts. This will range from sovereign risk pools in the Pacific, Africa and the Caribbean. The insurance schemes focus on the meso and micro level benefitting smallholders, the urban poor and other vulnerable groups.

Patricia Espinosa, Executive Secretary of the UN Climate Change Secretariat, said: “People devastated by recent weather events and communities vulnerable to climatic impacts are looking to the nations meeting in Bonn for an answer, for support and hope for the future.”

“This new and higher ambition initiative represents one, shinning, example of what can be delivered when progressive governments, civil society and the private sector join hands with creativity and determination to provide solutions,” she said.

“This Global Partnership brings important groups like the V20 group made up of those countries most vulnerable to climate change and the G20 group of the world’s strongest economies together around one table so that they can join forces to increase the resilience of poor and vulnerable people to the impacts of climate change. Instead of only reacting to catastrophes we want to shift to planning, preparing and protecting,” said Thomas Silberhorn.

The new Global Partnership comes as the UN Climate Change Secretariat has also launched this week an online platform or Clearing House for Risk Transfer under the Paris Climate Change Agreement that will use artificial intelligence to connect countries seeking innovative insurance solutions with countries needing them. 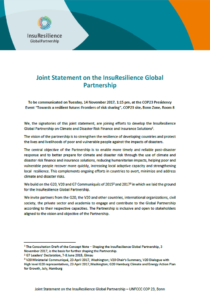